This talk will highlight the work of different agencies involved in preventing the  extinction of plant species and the urgent need for more coordinated action. The fundamental importance of taxonomic botany will be emphasised as a basis for conservation decisions. The multi-functional role of botanic gardens as agents for plant conservation will be highlighted with examples of international collaboration. International UN targets have been agreed for biodiversity conservation by 2020 and progress towards these will be discussed using examples from the Flora Malesiana region. Suggestions will be made for prioritising further action.

Talk: The Trees I have Loved and Lost

The last 40+ years has witnessed a great deal of change in forest cover in the Malesian region, with the result that many forest species have become highly threatened. The speaker will reflect on his experience and observations during that period. The talk will focus on a number of tree and palm species, trace their demise, the causes, and the outlook. It will reflect on the Global Trees Campaign in Fauna & Flora International and summarise the approach, the aspirations and the needs which will be discussed in more detail in a separate workshop later in the meeting.

Talk: 175 Years of Herbarium Bogoriense and its role in producing an enumeration of biodiversity in Indonesia 2015.

The Indonesian archipelago is recognised as one of the world’s biodiversity hotspots. To date 120 species of Gymnosperms have been recorded, with the highest diversity found in Sulawesi. It is estimated that there are between 30000-40000 species of Angiosperms in Indonesia, of which only 19,122 (about 50%) have so far been recorded. Levels of endemism are also exceptionally high in Indonesia with about 40-50% of plants endemic to the country. Of the 1.5 million species of fungi in the world, about 750,000 species have been described so far. In Indonesia there is an estimated 80,000 species of which 16,000 are macro fungi, and 64,000 micro fungi. Just over 20% of known Pteridophytes are also found in Indonesia. An important source of authoritative information about the Indonesian flora is provided by the collections of Herbarium Bogoriense (BO). Inaugurated with the name “s’Lands Plantetuin te Buitenzorg” in 1817. It was established in Bogor Botanical Garden as the reference of Indonesian plants, especially for agriculture and horticulture. In 1841 the Herbarium was established, followed by Museum Zoologicum Bogoriense (1894) and the microbial cultures collection (InaCC-LIPI) in 2014. These reference collections have played a crucial role in recording, mapping and monitoring the distribution of biodiversity in Indonesia and have allowed the production of the “Present status of biodiversity in Indonesia”.

Title: Waiting for the flowers- the role of living collections in taxonomic research.

Since the establishment of the Royal Botanic Garden Edinburgh in 1670 as a collection of medicinal plants taxonomy has been at its heart. Even before the publication of Linnaeus Species Plantarum it was important to establish the correct identity of medicinal plants for use by the doctors of the day. Over the years the location and focus of the garden has evolved to serve many and varied functions. Taxonomy however has continued to play a key role in preserving the special nature of the garden as a ‘botanic garden’. From the earliest years exotic plants were introduced to the garden giving it an international flavour and this has continued with staff today collaborating with many different gardens and botanical institutions around the world. For over 300 years living plants have been brought to the garden, grown to maturity and described. Many of the early novelties came from North America and China, especially Gymnosperms and Rhododendrons. Today much of our efforts are focused on plants from areas that are botanically rich but poorly known such as the Malesian region and on families Begoniaceae, Gesneriaceae and Zingiberaceae. The expertise and ingenuity of the horticultural staff has been essential in cultivating unknown species and bringing them into flower so that they can be scientifically described. This has been aided by an enlightened policy of including horticulturalists on collecting expeditions so that their knowledge can be used to bring plants back in good health but also to better understand the natural conditions in which they grow so that the plants can be grown to perfection in Edinburgh. 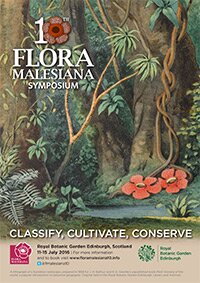